Windshield wipers serve a significant purpose, but they can become a huge nuisance if they are continually making noise while in use. Some people deal with the occasional noise from time to time, but if it is a consistent thing, something needs to be done.

The good news is that there are solutions out there that actually work, and it doesn’t take too much effort. Some issues might be more troublesome than others, but a little bit of trial and error will usually yield results.

These are the most straightforward fixes as far as noise is concerned. They should be done even if there is not noise happening, because it helps with the longevity of windshield wipers.

People neglect their windshield wipers way too much, unless there is something wrong with them or they are making too much noise. What people don’t realize is that a few seconds of work every once in a while can help a driver be a bit more proactive about everything.

1. Clean Off Both the Wiper Blades and the Windshield

The number one reason for a squeaky windshield is that it happens to be dirty. Even if rain is falling, there is still going to be built up dirt on the windshield that causes noise. Do not assume that rain is going to wash everything off magically without having to put in any work.

There is no set amount of time for how often people should wash the windshield, as it mostly depends on judging how things look. Some people wash their windshield once a week, while others do it more frequently just to stay on top of everything.

To wipe the entire windshield, make sure to lift the wiper blades up first. The blades should be cleaned off first since some of the soap and water will fall off onto the windshield. Once both blades are washed, continue with cleaning the windshield.

Most people will find a way to get this done in less than a minute once they get a routine down. In fact, a good way to stay up on this is to do it while also filling up the car with gas.

They don’t need to be checked nearly as often, but make sure that everything is in working order with the windshield blades before placing them back down.

There could be sine build up on the arm or the hinges of the wiper blades. Not only that, but there could be some structural damage that is causing some noise issues.

One good little hack I saw someone do on Youtube is to clean the wiper blades using w40. It works really good, I suggest you try and see how well it works in making the squeaks stop altogether! 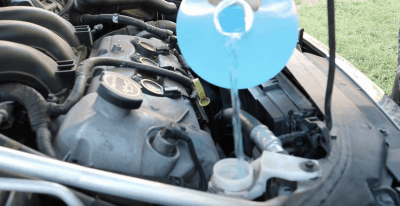 Unless wipers are used during a heavy rainstorm, windshield wiper fluid is essential every time they are turned on. Otherwise, it increases the chances of noise becoming a problem.

There is not an unlimited supply of windshield wiper fluid in any car. If it’s becoming a bit too noisy, it could be the simple fact that the wiper fluid is not putting out much, or it’s just not working at all.

For people who use their windshield wipers a lot, checking once a month on fluid levels might be the best way to go. It really does not have to be checked that much, but it is the first place to troubleshoot if there are noise issues. Without windshield washer fluid, windshield wipers can become noisy in any situation.

Buy windshield wiper fluid in bulk to save a little bit of money. It might seem excessive, but most people will go through more fluid in their lifetime than they thought was possible.

3. Soften the Rubber on Wipers

Rubber located on cars can sometimes become hard over time. Having a lot of exposure to the sun, combined with other elements, is usually the culprit. It is frustrating to have to repair the windshield wipers, but it is cheaper than replacing them.

The do-it-yourself method of fixing rubber on windshield wipers is to use a bit of rubbing alcohol. Put it on the rubber part of the wiper to start with. Rub it up and down the length of the parts so that everything is covered. Usually doing this one or two times will be sufficient enough to soften the rubber.

If it is beyond repair, the only real solution is to replace the windshield wipers. Some people will look for ways to replace just the rubber, but it is usually worth it to just go ahead and upgrade everything at once.

4. Tighten Up the Windshield Wipers

Under constant use, windshield wipers can appear beaten up. It might seem like they are pretty durable at times, but anything can go wrong with the mechanism that causes some noise.

Perhaps the one thing that goes out faster than normal is the fasteners. They are usually either too loose or too tight. In both scenarios, it can lead to some sound that people don’t want to deal with.

One solution is to fasten them correctly so that the noise goes away. Another way to fix things is to put a little bit of fluid on the fasteners to reduce the amount of friction.

These next few solutions are a little more complicated but should be possible for those trying to troubleshoot everything on their own.

Remember, it is worth it to car manufacturers to make fixing and even replacing windshield wipers to be as easy as possible. No one wants to have to go through a complicated process every single time. The good news is, they don’t have to.

If a person invests in a windshield protectant like RainX, they might feel like they have done the right by thing protecting that important part of the vehicle. However, some of them actually lead to noisy windshields if they are causing just the right amount of friction when wipers are running across.

Protectants are not meant to cause this, but sometimes a combination just does not work. Maybe the protectant needs another fresh coat, or it needs to be removed to avoid a squeaky wiper blade. Some people swear by these protectants, but if it comes at a noisy price, it can be very frustrating.

Although it is recommended to switch out wiper blades every 6 to 12 months, very few people abide by those rules. Instead, they tend to stick with replacing wiper blades when they actually need it. As long as they work and don’t make noise, they stay on.

While some people might be lucky enough to get away with that method of thinking, it could be a big reason why there is a lot of noise going on. If they are old and starting to wear out, they are going to cause a different amount of friction that can be pretty loud.

When buying a new set of wiper blades, look for options that are labeled as quiet. These are usually some pretty solid wiper blades made of materials that reduce the chance of a lot of friction.

Make sure to try other options before making the investment and a new set of windshield wipers. They are a bit more expensive, but sometimes all that is needed is a focus on sound.

This is where wipers built for specific locations make sense as well. If a person lives in an area with a ton of heavy rainstorms, they make wipers for that. The same goes for very cold locations and very dry locations.

Can noisy windshield blades actually be caused by a more severe problem?

More often than not, using a cleaning solution or a simple blade replacement takes care of noise issues. However, two more significant things could be causing the problem. Not only does it cost a decent amount of money to repair, but if left untreated, it can become more dangerous.

The first issue is the entire wiper blade assembly. This usually happens after years and years of regular use, wearing down in time and becoming an issue. Maybe the wiper can’t stay in the right position, or there is a buildup in the wrong area.

Another issue that pops up is that a person could be dealing with some type of actual windshield problem. The surface itself could be very rough after dealing with a lot of harsh weather conditions. There could also even be a crack in the windshield that is not noticeable at first, but upon further inspection, it is there.

Fixing a windshield is obviously a bit more expensive than fixing windshield wipers, but the alternative is being at risk in case the entire windshield shattered. That is why it is always important to take care of anything like that sooner rather than later.

Is it challenging to replace windshield wipers without professional assistance?

Most people will be able to replace windshield wipers on their own, even if it is their first time doing so. They have made it where a person does not even need tools to replace some wipers.

All a person needs to do is purchase the right size so that they fit and work properly. New blades will actually latch in the place once they are taken out of the package, and they snapped back off for easy replacement.

Windshield wipers that work properly should be very efficient at clearing the windshiel, and work under all conditions. Make sure that they are also operating well at every speed. Some windshield wipers will make a lot of noise at a certain speed, and then be quiet at other speeds.

As long as regular maintenance is held up, they should be able to operate just fine. Usually, a sound means something is wrong, so don’t completely ignore it. Sometimes, it will be caused by the conditions, but that is not always going to be the case. It is better to be proactive about replacing windshield wipers and let them wear out too much.

Finally, for those people who live in a climate that is particularly rainy, particularly snowy, or more, get windshield wipers that are good for that type of weather. They are going to be built to last a little bit longer, and that way, a person is not replacing things quite as much.

For the last number of years, I've Been dedicating a lot of time in soundproofing and helping people be able to soundproof their home, business, and vehicles. I also have a YouTube channel by the same name Soundproof Guide.

People are always looking for solutions when it comes to controlling sound in any room. One of the most significant issues comes down to footsteps and squeaky floors, but there is a solution out...

There are so many different places within a home that can cause noise issues if not treated properly. There are ventilation air ducts virtually everywhere scattered around to provide a much more...