Many people who own chickens in urban areas usually try to keep things relatively quiet. Even though a lot of communities allow people to have chickens in their backyard, it’s usually frowned upon when neighbors hear does noises all day and night.

Out in the country, neighbors are much less of a concern. At the same time, noise levels still matter for those who share the land with the chickens. No family wants to deal with a noisy flock that distracts from daily activities.

That’s why for one reason or another, it’s important to get the quietest chickens possible in. Chickens aren’t that noisy overall (other than roosters), but some breeds are noisier than others.

Which chicken breeds work best? There are a few that are perfect for keeping everything a little bit quieter around the backyard or farm.

For many years, the Buff Orpington has captured the attention of so many chicken coop owners. They are great not only for laying eggs but providing meat as well. More than a few people stay away from ever making them meet birds, simply because they act so much like a pet.

With this breed, a person can interact with them the same way as a dog or cat. They are very friendly, allow humans to pick them up, and hardly ever make any noises.

That’s why many consider them to be the best of the best for urban settings. Neighbors won’t even realize that chickens are living next to them unless they randomly spot them.

For some large brown eggs, Rhode Island Reds are great options. A lot of people will have them in Barnes, but they can also live in urban settings just fine.

They don’t move around much and they are extremely quiet but don’t try handling them too much at all. They are not big fans and can become visibly frustrated if it is tried.

As the name suggests, these are some pretty small chickens. They lay small white eggs very consistently, and generally speaking, a lot of people love the overall taste of the eggs. They are very versatile for recipes, or to eat by themselves.

The reason why they are so quiet comes down to them being very content just sitting for long periods of time. They serve quite a bit as surrogate moms, especially for breeds that don’t particularly like to sit.

At first glance, these might not look like very quiet birds just because they are so large. They are huge, have feathers going everywhere and perfect as a pet if a person wants to treat it like that.

The key with Cochin hens is to use them as surrogate moms for chickens to do a better job of laying eggs. They are pretty average in that department, so just having a bunch of coaches will not work.

A lot of people love Wyandottes as very dependable egg layers throughout the year. They are one of the most common breeds in general, especially for people who have a limited amount of space. They are very impressive looking, coming in various colors like blue, silver and gold.

If the plan is to only have one quiet breed of chickens in the backyard, this is a good one to go with. They can provide a lot of value by themselves without having to depend on other breeds to bring it all together. 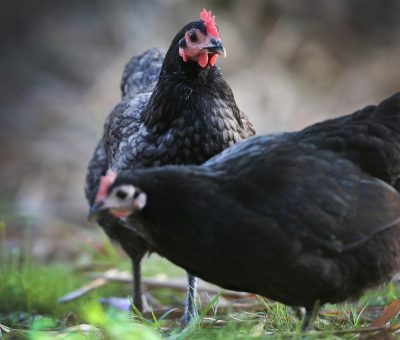 Most chickens specialize in either laying a great number of eggs, or having the ability to sit. Australorps do both extremely well, and while not the quietest in the world, they are still considered pretty silent amongst breeds.

These chickens lay medium size browned eggs, and they act very calmly overall. Even in larger flocks, they won’t get too excited. Having chickens that are very calm and collected will keep the noise level down overall. 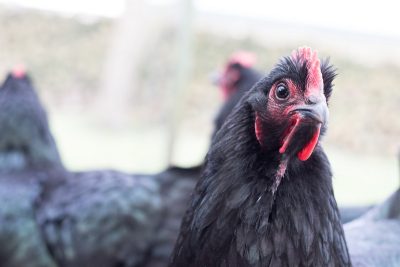 The Java chicken breed is one of the oldest breeds ever according to history books. They provide quality meats and eggs, even though the hens are average it sitting.

They are always worth mentioning because of the history, but they only make an appearance at this low on the list because they are an endangered breed. They are not nearly as common as they used to be, and there is a decent chance they are phased out completely at some point.

Those who do have Java chickens should try to keep the flock relatively small. They don’t do well in really large environments, and that could lead to more noise than people want to deal with.

Why do People Have Chickens in their Backyard?

To some people, it might seem pretty crazy to have chickens in the backyard. Sure, they make sense on a farm, but in the middle of a city? Why do people bring a traditional farm animal to small yards?

The number one reason why people invest in chickens to have in their backyard comes down to the eggs. Getting eggs from chickens this way cut down on supporting industrial farms and other questionable practices people might not necessarily agree with.

People can control exactly where they are getting their eggs from, how the chickens live at all times, and more.

According to some people, the eggs from a backyard chicken is also healthier to consume. Depending on how they are treated in the backyard, free-range chickens will have the ability to search for food on their own, move around as much as they want, and generally speaking, live a better life compared to the sources of other eggs.

Some people will just have enough eggs to provide for those in the home. Others might have a small business where they offer their local, free-range eggs to a specific customer base. As long as there are too many chickens on location, there is usually no problem at all. (Source)

The ban on Chickens

Despite chickens not being all that loud, several municipalities have banned chickens. It’s important to look into any ordinances before investing.

A lot of the reason why they become banned comes down to roosters and their general reputation. They are well known for their cock-a-doodle-doos in the morning, and that frustrates more than enough neighbors. (Source)

What type of noise level is expected from a flock of chickens? 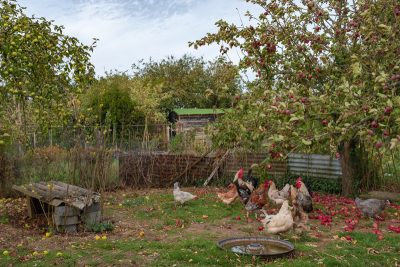 The biggest noisemaker in any flock is going to be the rooster. Since they are more commonly banned in certain locations, there might not be a rooster in the flock. However, even in a flock made entirely of hens, there will be at least one making a decent amount of noise over the others. That is because they take over as the leader of the flock.

The sound from these hens is a little louder than normal clucking, but not to the point that it sounds like a rooster. The leader hen will make considerable noise when they need to communicate with the rest of the flock. Maybe there is a new food that is now available, or perhaps there is a danger that needs avoiding.

There’s also the constant clucking during any type of activity. This is usually pretty quiet and not too much of a distraction, but if a person owns a lot of chickens, it could become a little noisy. If the coop is near where people hang out, the noise will become noticeable.

All in all, normal noise levels from chickens will be lower than dogs. That’s why many people who support owning chickens complain about why they are banned anywhere. Dogs always seem welcomed everywhere, even though certain breeds make a good amount of noise. (Source)

Chickens that are well taken care of will not only produce better eggs but also become less maintenance. That means fewer loud noises in general, which is beneficial for everyone.

Caring for chickens comes down to giving them a great home to live in, and doing what needs done daily. A great chicken coop secures hens when they are getting ready to lay eggs.

Not only do they need a place to roam around, but protection from predators becomes more and more important as they get close to laying eggs. There are more predators out there on the farms, but don’t underestimate predators in urban areas to find a way to get to exposed chickens.

Some people will buy chicken coops that are already made, while others will take it on as a do-it-yourself project. Either method works, as long as each chicken has at least 4 square feet of area to run around in. Cramming them into a small space is going to harm their quality of life, and possibly affect their ability to lay eggs.

Each day, chickens need a little bit of feed and water. By keeping them healthy and nourished, the chances of quality eggs go up significantly.

Once a week, many experts recommend to also clean out the chicken coop so that everything stays sanitary. Salmonella is just one very real issue that pops up in chicken coops at times if they not cleaned out properly.

Not everyone will have space, patience or even need for chickens in their backyard, but there is a growing number of people looking into this as a solution to having a healthy supply of eggs.

Chickens are never going to be 100% quiet, but noise can be kept at a minimum by taking care of them the right way. It also helps to go with the right breed, but even noisier ones won’t cost that much of an issue.

Don’t expect chickens to take over for cats and dogs, but having a few on location can prove to be pretty beneficial. There are a few animals a person can have at their home that provides actual, tangible value.