Soundproofing is something that a lot of people don’t quite understand that well until they start looking into it for a project. It might seem like a straightforward process, but there are several methods to take into consideration depending on each situation.

For those who are trying to save a little bit of money and not try to pull anything too complicated off, there are just two methods to consider. There is the option to go with a staggered stud wall, or a double wall.

Some people strongly endorse both methods and depending on each individual situation, one might be better than the other.

Which one is the best option? Here is a closer look at staggered stud and double wall options for soundproofing. After breaking down both options, most will be able to make a pretty important decision on what to go with in the end. 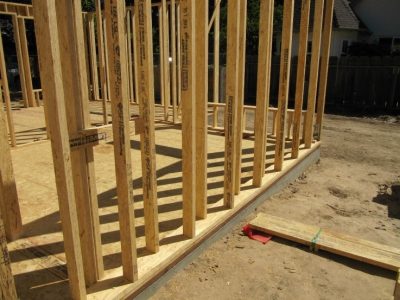 In a typical wall, there will be lumber used for framing throughout. The most typical set up is having 2 x4s lined up and separated by about 16 inches. Each 2 x 4 is attached to plates at the bottom and the top. These plates tend to be around 4 inches wide.

For it to be considered a staggered wall construction, those plates at the bottom and the top are a little wider at about 6 inches. The studs on the 2 x 4 lumber are alternated on each side of the plate. This provides staggered studs with a gap of 12 inches.

What Is The Goal Of This Type Of Construction?

The goal of this type of construction is there will be an added air cavity that helps with isolating sound with staggered stud construction. This air cavity makes sure that air does not move quickly through the wall, and although it may not seem like much, it makes a huge impact.

It might make sense, in theory, to go with single studs that are 6 inches wide instead of staggered stud construction. However, this will provide an air cavity that is not big enough to take advantage of, and a person won’t experience decoupling.

The bigger the air cavity is, the more of an impact it makes on soundproofing. The goal should always be to have as big of an air cavity as possible. Maximizing it with different types of wall setups is the best way to approach it.

Decoupling is something most people know a little bit about when handling sound in a room. Having staggered stud construction instead of 6 inch wide single studs will help cut down the number of points of contact between the two walls. When there is less contact, there is less sound vibration going on.

The name is pretty self-explanatory with double stud wall construction. This is when two pretty normal wall frames are joined together and used as a combination to help with soundproofing. As long as there is some gap between the two frames, there will be a decent amount of decoupling.

It might not seem like much, but with a gap, the thickness of the wall can easily become 10 inches or even a foot.

The bigger the gap, the more it will help with soundproofing. It just can’t be too big, or it will have a negative impact on the rest of the construction. It also shrinks the size of the room if there is a ton of space between the two walls.

Which Type Of Soundproofing Works Best?

While there is always an opportunity to individually test both types of construction, most people rely on tests that have been done in the past. Both soundproofing methods have been around for a while, and there is enough data out there to make a sound decision on what works best.

The typical results of a staggered stud wall will give a standard soundproofing rating of around 48 to 50 on the STC scale. This number might not mean much to the average person, but there are sound ratings for how loud sounds could be that are blocked by certain levels of sound isolation.

In this range, people should expect loud talking to not pass through, and for loud music to mostly be silenced. That might be the exact type of soundproofing level a person is looking for, leaving them extremely satisfied.

With a double stud wall, the soundproofing level jumps to an even better level. It hangs right around 60, which means that loud music is completely blocked, as well as other louder sounds.

When comparing the two methods and using the same sounds as a test, it is very noticeable that the double stud wall does a superior job of killing sound.

What Other Additions Can Help Either Construction?

The measurements of these two types of construction are done initially with no added mass or damping. However, this can really increase just how effective these walls are with soundproofing.

The most common type of mass is, of course, drywall. Adding drywall to just one side can help, but both sides will see a pretty significant difference.

It will make construction jump up by about 10 points on the STC scale referenced above. That means staggered stud construction with drywall will provide roughly the same amount of soundproofing as double-wall construction by itself.

The best type of damping compound used to help out with soundproofing is always Green Glue or a similar product. This is very easy to add to the mix, and it helps to make a pretty significant difference.

Why doesn’t everyone use double-wall construction for soundproofing?

It seems pretty clear in the test that double stud wall construction is the more effective way to go for soundproofing. While the tests certainly do not lie, there is the issue of this type of wall taking up a good amount of space.

There is a price to pay to form that type of space between the two walls. A typical double stud is going to take up about 2 feet, which can significantly reduce the size of a living area in smaller places. That amount of space starts to add up, and it might be more than most people are willing to sacrifice.

With staggered stud wall construction, the space is only about 10 inches to 12 inches at most. Saving about a foot of space is certainly something most people can appreciate. It comes down to simply deciding if that extra bit of soundproofing coverage is worth all that space being eaten up.

Which option is the ultimate choice?

For people who want the ultimate type of soundproofing, double-stud walls are the way to go. It is going to provide superior soundproofing, and most people will use this professional set up if they are building a room specifically for recording.

For more traditional soundproofing, staggered stud might have the advantages a person is looking for. It will not provide the same amount of soundproofing, but the construction takes up a lot less space.

Not everyone has the luxury of using up more than a foot more of space on each wall. In fact, there are some locations where building code will not even allow double-wall stud construction.

It is always advised to check with local building codes first to make sure everything is allowed.

Other tips on installing staggered or double-stud walls

No matter what option a person ultimately decides on, there are some additional tips to keep in mind when setting things up. For starters, the air cavity created should always have loose insulation filling. By adding some loose insulation, it will help with sound absorption.

If there is trouble with any gaps when the floor and ceiling meet up with drywall, use acoustical caulk to help as much as possible. It might not seem like that big of a deal, but getting caulk specifically for acoustics helps out.

Soundproofing a room makes a lot of sense, but it is a complete waste of time if other parts are completely ignored. Make sure to look into soundproofing methods for windows, air vents, and doors. This is where a lot of sound can come in and go out of a room.

The last thing a person wants to do is spend all this time and money on soundproofing walls, only to overlook these areas.

The two types of construction both have their advantages, but it seems like staggered stud is helping out enough for people to be satisfied.

There will always be people out there who want the best of the best, and that is why double wall soundproofing is not going away. It’s just not feasible for a lot of people, and no one should feel pressured to have some set up like this.

Both methods are going to improve the current soundproofing in a room significantly. Take a little bit of time measuring, analyzing, and ultimately deciding before spending any money. This is the smart way to address soundproofing in a home or building.