Soundproofing is a pretty big deal for a lot of homeowners out there. They are always looking for ways to improve the way that their home sounds, and exploring all opportunities to get the job done makes sense.

Foam wallpaper is just one way to block sound. That is, if it actually works the way it is advertised.

Does foam wallpaper block sound? While claiming it is truly soundproofing is incorrect, it does have a positive impact on creating a better-sounding area. This type of wallpaper is for sound absorption and not meant for soundproofing.

We explore whether or not it’s worth the investment, and what a typical shopper should expect.

What is Foam Wallpaper? 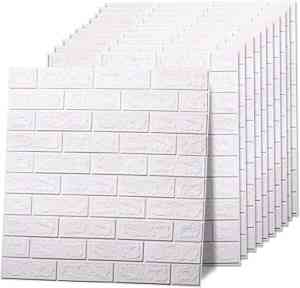 My Recommended Foam Wallpaper From Amazon!

Foam wallpaper is advertised as a type of soundproofing option that has gained a lot of supporters over the last few years.

It is a thin wallpaper just like other options out there, but the extra bit of foam acts as a way to kill sound and make it more enjoyable overall.

While the barrier might not seem like much, it is much thicker and more effective at controlling sound than several others that are out there.

With that being said, foam wallpaper WILL NOT soundproof a room. It helps with sound absorption, killing echoes, and reverberations.

It falls under the soundproofing umbrella as a way to signify that it helps with sound in general.

Best Ways to Soundproof a Wall

What Are The Major Positives to Foam Wallpaper?

While soundproof wallpaper might not actually be soundproof, the truth of the matter is it still provides plenty of benefits for all types of setups.

Compared to regular wallpaper, having this foam wallpaper is definitely an upgrade if sound is very important.

Foam wallpaper is a little more expensive than regular wallpaper, but not to the point that it’s going to break the bank.

In fact, compared to so many other soundproofing and noise control solutions, it is a pretty inexpensive investment overall.

The great thing about investing in foam wallpaper is that it’s going to cover the entire area, so it makes it even more valuable.

For other options that are low in price, they might only cover a very small part of the room it goes in. 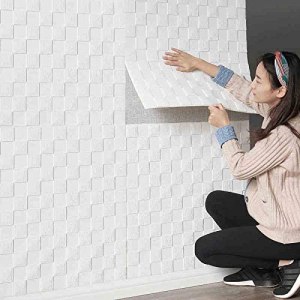 Foam wallpaper is virtually the same as any other type of wallpaper out there, meaning it can be installed without needing any professional assistance.

That’s great news for people who don’t want to spend the extra amount of money and get somebody out to take care of things.

Just have a little bit of patience in getting things lined up correctly, and it will be good to go.

Even a few years ago, foam wallpaper was not all that popular. Soundproofing has really exploded over the last few years, and it seems like companies are trying to advertise their own solutions all the time.

This means that there is no need to sacrifice as far as design options are concerned. A person can get a good look that is also going to provide some noise control along the way.

For a lot of people, that’s a major selling point, because making a compromise on looks is just not going to happen when discussing interior design.

This wallpaper isn’t actually soundproof, but what it does work as is an alternative to acoustic foam. The draw to investing in this wallpaper is that the room will have a reduced echo, as well as reduced reverberation and amplification.

How much of an impact it makes on a room is really dependent on what all is needed. In some cases, this can be a standalone solution that is good enough for the average person.

For others, it might be the start of a bigger project, but there’s nothing better than having a solid base layer.

Does it really matter if wallpaper is fire-resistant? While it might not be right on top of a person’s mind when they are shopping for foam wallpaper, the truth is that it is definitely a selling point.

Something to keep in mind is that people look at foam wallpaper in the first place because they likely have electronics in there.

They want to control the sound the best way possible with those electronics. That means that room has a higher chance of something going wrong and potentially catching on fire. This fact makes wallpapers that are fire resistant all that more appealing.

Foam wallpaper seems like a good investment in some cases, but not everyone is going to end up being a fan.

Understanding some of the limitations and everything else that goes into it will allow people to make smarter overall decisions.

This is a big one for a lot of people, but it’s already been touched on a little bit. Even though it’s called soundproof wallpaper as an alternative name, foam wallpaper isn’t actually soundproof.

In order for something to be soundproof, it must add mass to block sound going from one place to another. A person is not going to get that from a thin piece of foam wallpaper.

Not Built To Last

Wallpaper is not going to last as long or look as nice as a paint job. This is particularly frustrating for many people who are considering foam wallpaper because there is such a thing as soundproofing paint.

It works roughly the same, but if the wallpaper is not going to last as long, is it really worth it?

Those who can’t live with some imperfections here and there might want to look elsewhere. It doesn’t take much for there to be a little bit of a snag in the wallpaper, which can be an eyesore if it’s in a certain area.

Most people are pretty underwhelmed when they install foam wallpaper. Yes, there might be some difference in the way the room sounds, but it’s not going to do much of anything by itself.

In order for foam wallpaper to really excel, it needs to be partnering up with at least one other treatment.

Some people go as far as putting mass-loaded vinyl (Amazon) underneath the wallpaper if they can.

While it does add some bulk to the setup in general, it’s going to do a much better job of controlling sound and making it actually feel like a person wants to be.

There are other options available to put over the wallpaper as well, although that can distract from the design.

All The Facts About Mass Loaded Vinyl!

Is Foam Wallpaper Worth The Price?

At the end of the day, foam wallpaper is not going to be a true game-changer in the vast majority of rooms.

With that said, when doing a redesign, it doesn’t hurt to have a base layer that will help with echoes and reverberation.

Since the price is not that much more than regular wallpaper, those already shopping should take a look at some of the soundproofing solutions.

With tempered expectations, shoppers should be mostly satisfied with what they end up getting.