Windows are notorious for not being able to handle much when it comes to keeping a room properly soundproofed. It is one of the weakest areas in any room, allowing sounds to leave and enter areas without much of an issue.

People have been trying different solutions here and there, and plexiglass has often been cited as a pretty good option. Many wonder though, is plexiglass good for soundproofing?

There is also the opportunity for people to only use a single layer of plexiglass if that is what they want to do. It is usually easier, and a less expensive solution. Most people are willing to take a chance on not having quite as much sound kept out of the room in this scenario. It usually requires having to hire a professional to take care of things when there are two panes involved.

How Plexiglass Measures Up as a Soundproofing Solution 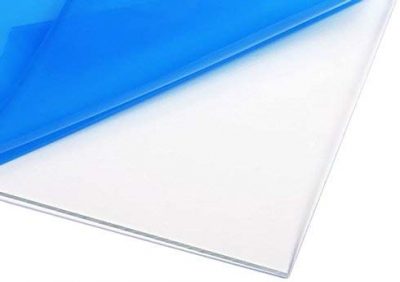 First things first, plexiglass is just one name for acrylic sheeting. It also goes by Perspex, Lucite and other company names. It is a very versatile option for people looking for an alternative to glass, and it has benefits beyond soundproofing that make people use it.

Perhaps the biggest benefit to plexiglass is that it is shatterproof. Glass is beautiful in many ways, but the fact that it can shatter is a significant turn-off.

The plexiglass offers up much more versatility, and is popular in modern setups. A lot of companies will exclusively use plexiglass instead of any other alternative. (Source)

Click here for some great plexiglass prices from Amazon.

The goal of anyone using plexiglass for soundproofing methods is to go as thick as possible, within reason. Plexiglass comes in several different types of thickness, but at the lowest, a person should be looking at 3/8 of an inch thick.

There are opportunities to go 1/2 inch or even more for very noisy locations, but it can start to get up there in price. A thicker piece of plexiglass for one big window can certainly become costly, and that is before cutting it down to fit.

Thickness matters, but so does the type of plexiglass. There are several different variations, depending on use. Most people will understand that it makes sense to go with window-grade plexiglass, since it will handle the elements on a day-to-day basis.

Plexiglass that goes in a window needs to handle the sun rays beating down every single day. It also needs to be scratch and smudge resistant, at least to a certain degree.

Two Panes With an Air Gap

Some people are just fine with one pane of plexiglass, but it is only going to do so much from a soundproofing perspective. It makes a lot more sense to invest in two panes of thick plexiglass, which will totally replace the existing window. This is a bigger task for sure, but why not do the project correctly the first time?

Besides adding additional thickness, that airgap is really going to make a difference with soundwaves. Most plexiglass windows will have an air gap that is somewhere between 2 and 4 inches. The air inside will kill any waves and vibrations coming in and out of the room. (Source)

The Little Things that Make the Windows Fully Soundproof

The plexiglass is going to do most of the soundproofing work, but the level of effectiveness comes down to some of the smaller things. It might not seem like that big of a deal, but doing the soundproofing project just right is essential for really ensuring that everything sounds great in the end.

Try to get the plexiglass windows to fit as perfect as possible. Sound can travel through even the smallest gaps, and poorly put together windows are just going to look pretty bad overall anyway.

Take the time to accurately measure, get the right type of plexiglass, and go from there. If it is a tricky shape, ask for expert help. If it is a straightforward cut, most should be able to do some cutting themselves with tools at home.

Even after measuring for a tight fit, there are still bound to be a few small gaps here and there. When that happens, using acoustic caulking is the way to go.

Green Glue (Amazon Link) is a very popular option in this category, and it helps specifically with controlling sound. It doesn’t really cost that much more than some of the other options out there not for soundproofing, so it makes sense to use this to finish off a job.

Tips on Installing Just One Sheet of Plexiglass

Since it is a much easier and more affordable solution, there will be plenty of people who opt for just one layer of plexiglass attached to their existing windows. This is not going to be quite the same, but it is still better than nothing when strictly looking at sound control.

A person can technically put the layer of plexiglass on the inside or outside of the window. Most will opt for the inside, as they do not have to worry about any wear and tear issues like they would on the outside. Not only that, but it is easier to build a new window box inside instead of trying something else outside the building.

When installing just one sheet, it is usually pretty easy to remove if need be. That is always a major positive using plexiglass, because if it doesn’t provide the type of benefits one is looking for, there’s always an easy out.

Just make sure that it is given the proper amount of treatment before making a decision. Plexiglass will work to a certain degree when first installed, but it won’t fully show off at soundproofing effectiveness until it has all the gaps closed.

Are There Any Alternatives to Using Plexiglass?

The main reason why people are looking at plexiglass from a soundproofing perspective is that it will provide some pretty instant results. There is really no true solution that is a genuine alternative, but there are some ways to make it a bit better. The good news is that these

alternatives are also pretty cheap, so if they do not work as much as one would hope, they are not out too much money in the end.

Even though they are marketed as soundproofing curtains (list of best soundproof curtain options), just about any type of heavy curtain will provide the same amount of value. People should expect some instant benefits, and it is worth a try since they are so inexpensive.

It also helps that curtains come in so many different color and style options that the overall look doesn’t need to be sacrificed. Take the time to invest in some soundproofing curtains that match the rest of the room, and they won’t even seem like that big of a deal.

Curtains are not going to work as well as plexiglass, but they do help in some ways. Just keep in mind that for them to work, curtains remain closed. When closed, there will be no light coming in, which is a huge benefit of plexiglass.

The curtains are also pretty heavy compared to standard options, so a new curtain rod might need installed for proper support. Otherwise, the current rod might collapse.

For a more temporary soundproofing solution, using a window plug might be a great option to go with. This essentially tries to turn a window into a standard wall by having a plug inserted to block sound waves.

Plugs come in different types of masses, and there might be foam and acoustic mats attached as well. Some people will make a purchase that is ready to be used, while others will turn to a more do-it-yourself opportunity. If it is an awkwardly shaped window, most do not have any other option than taking the task on alone.

Keep in mind that as soon as the plug goes in, all the light is blocked as well. It is not something meant to be inserted at all times, but it provides a temporary soundproofing solution for recording or enjoying some entertainment.

When used along with curtains, people can have a reasonable alternative to plexiglass. Most will agree that two panes of plexiglass are still better by itself. Combining all three options might be the closest thing to complete soundproofing.

Why Plexiglass is Truly Revolutionary Product

Anyone who is serious about soundproofing a window should take a long look at plexiglass. It is not perfect, but it is about as good as one will find in the industry.

It is a bit of a process when trying to replace an entire window, but it is worth it, in the end, to have two pieces of plexiglass if possible. Even adding one layer is better than the alternative, which is why so many people are going down that route.

Make sure to remember that when adding two layers, The windows become pretty thick in general. If there’s not enough space, there could be a bit of a problem in executing this plan.

Make sure to properly measure the current space in the window area, and seek out professional help if it seems like a complicated endeavor. No one wants to be in a situation where they mess up their windows by trying to do too much themselves.